This page is part of the ARCHIVE COPY of John Bailey's original throwing knife shop. Details and copyright

Published in The Orlando Sentinel on July 23, 2000
Instructor Emphasizes Discipline

Dennis Wall of The Orlando Sentinel.

They are taught to use the knives and whips with caution and respect, not anger.
Leo Dixon, parent

WINTER SPRINGS -- Young boys hurling knives and cracking whips might be alarming at first glance, but in the back yard of Starlight Baptist Church it's done with good intentions.
On most any Thursday evening, about a dozen youngsters are learning to handle the dangerous weapons as members of the Starlight 1611 Crusaders Boys Club, which aims to teach them discipline, responsibility and respect. The club is named after the year the King James Bible was printed.
John Bailey, a church member, founded the club about eight years ago as a way to help guide boys into manhood.
Bailey uses combat weapons in his club because they are the tools he knows best. A professional knife thrower, Bailey developed his talent after a drunken driver struck his motorcycle in 1966. The accident damaged his left leg and made more rigorous athletics impossible.
To stay in shape, Bailey focused on his knack for throwing knives. He picked the sport up from his father and then honed his skills when he served in the Army. The motorcycle accident happened just days before the 19-year-old was to ship off to Vietnam. After his recovery, he still served in the Army but was not sent overseas.
"You should use your talents to help others," said Bailey, 53, who runs the club as a volunteer. "I would rather these boys throw knives in a safe environment instead of sneaking one out of the kitchen and throwing it into a tree. They might get hurt or break something, and all they're learning is deception that way.
"I want this club to help the boys to be well-grounded. By the time they are 12 years old, they should have no problem with their self-esteem. I try to help them develop the character to do the right thing on their own and not be malicious or destructive."
Bailey never had any children of his own, but he considers the club members "my boys." He runs a tight ship. All the boys address him as "Brother Bailey" or "Sir" and wear sharply creased uniforms of blue shirts and fatigue pants. Military-type lineups and prayers kick off each group meeting. When Bailey's authoritative but kindly voice rings out over the group, the kids halt and listen.
On a recent evening, the boys practiced throwing 12-inch knives and flicked bullwhips for about an hour as Bailey supervised and guided them.
"That`s great. Look at that. He didn't miss one," Bailey called out after 9-year-old Josh Posey threw a couple of knives into a target. "Way to go, Josh."
Many of the boys said they enjoy the competitiveness and sportsmanship of the club. Close friendships have developed among members, who can join the club at age 8. "We know Brother Bailey will always be here for us, and we can count on him," Josh said. "I look forward to this and can`t wait `til Thursdays so I can see him and all my friends." While some of the boys` parents admit to having uneasy nerves when they first heard about the weapons, they now praise the club.
"I was scared at first that my son was going to come home and start throwing knives, but that hasn`t happened," said Leo Dixon of Lake Mary, whose 11-year-old son, Christopher, is a member. "They are taught to use the knives and whips with caution and respect, not anger. It doesn`t bother me because of the tight supervision here."
At a recent club meeting, Bailey started the night off by reading a few Bible passages aloud and doling out some advice. "Everything we have is a gift from God, not something we`re entitled to," he told the boys. "When you`re dead and gone, you`re dead and gone. All the material stuff that you have just isn`t important. Helping and loving others is what will matter in 1,000 years. Keep that in mind. That`s very important in your life."
Then the boys attacked a pile of old appliances and electronics equipment. With Bailey`s help, they attempted to disassemble them and identify their parts. The boys eventually will be tested on the different types and uses of the tools they used in the exercise.
Bailey helped 11-year-old Shayne Garrow of Longwood unscrew the clear, plastic cover of a tape recorder.
"Golly, this thing isn`t coming apart for anything," Bailey said when he took over after Shayne made several unsuccessful attempts. Moments later, the top of the recorder popped off and Bailey handed the machine back to Shayne.
"Wow," Shayne said, impressed by Bailey`s strength. Then, he peered into the machine and asked Bailey, "Is this the motor?"
"It sure is," Bailey nodded, then called all the boys over to take a look at it, too.
Many parents said they have observed improvements in their sons after they joined the club. The young boys, they said, are more willing to take on leadership roles and responsibilities.
"Everything is positive," said Josh`s mother, Misty Posey of Winter Springs. "I have not seen anything negative out of Josh. He`s growing in the correct way now. It`s more than what any counselor could ever do for him."
Dixon added, "A lot of men today don`t spend time with their children. Clubs like this can help make up for that. Since my son has been involved, he wants to help me whenever there`s anything to be done and stays outdoors more instead of watching TV all the time."
Bailey hopes other adults start up such free youth clubs. Too many youngsters are growing up without enough guidance, he said, and some join gangs to feed their natural desire for fellowship. "There`s a lot of kids out there that are just giving up," Bailey said, "and it`s up to everyone to help as many as possible." 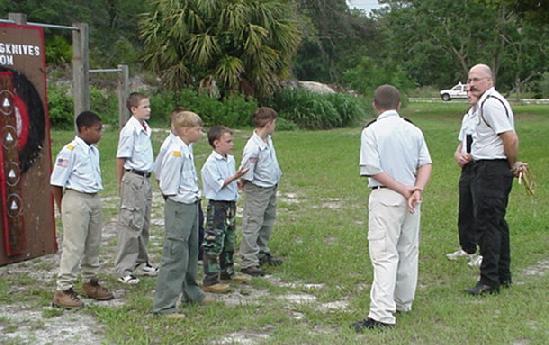 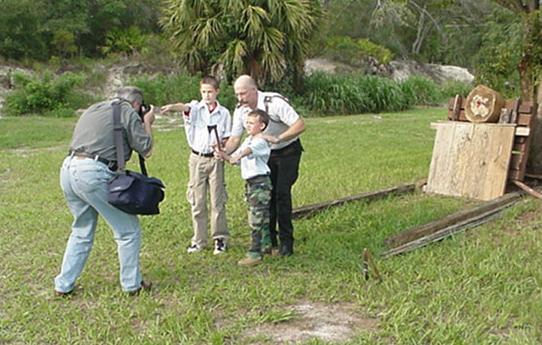 Return to the Homepage


© Copyright 1999 Bailiwick Enterprises. All rights reserved.
Reproduction or copying of images is prohibited.


This page is part of the ARCHIVE COPY of John Bailey's original throwing knife shop. Details and copyright